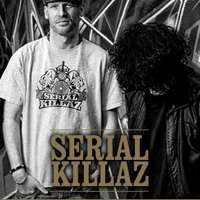 Serial Killaz first caught the attention of the Drum & Bass and Jungle world when they remixed Tribe Of Issachar’s Junglist back in 2005 for Rebel MC’s Congo Natty label, not long after they began to establish themselves as one of the most sought after production duos in the industry.

Serial Killaz have spent the past decade earning the reputation as the genre’s remix producers of choice reworking some of the most beloved tracks and giving them that signature Serial Killaz sound which has seen tracks released on heavyweight labels such as Congo Natty, Playaz, Philly Blunt and Urban Takeover.

Forever championing a strong Reggae influence in their music, they began to carve out an increasingly unique take on the Jungle sound, the results of which have led to remix work for some of the music scene’s biggest names.

IN 2010 a series of remixes for long time friend Rebel MC’s Congo Natty label led them to co-producing Top Cat’s Champion Deejay album alongside artists such as Chase & Status, Benny Page and Serum. They currently continue to work closely with Rebel MC producing and remixing tracks for his Congo Natty imprint.

In 2011 the duo remixed tracks from artists as diverse as Damien Marley and Nas, who asked them to rework their hit Promised Land for the powerful Sony Records label , to award winning Hardcore band Enter Shikari who’s Sssnakepit single was given a tough Drum & Bass reworking from the duo.

Later that year they remixed Toddla T and Skream’s Streets So Warm for the eclectic Ninja Tune label which resulted in Serial Killaz working on music for Toddla T’s live show and nationwide tour with Major Lazer.

In 2014 they produced tracks for legendary Jungle MC, Stevie Hyper D’s, Generation Hyper album for the Dance Concept imprint, while later that year they produced a series of tracks for Generral Levy’s ‘Forward’ album, as well as working on a single with Levy for their own Serial Killaz Recordings.

The duo have also featured heavily on the worldwide festival circuit headlinging stages at Glade Festival, Outlook Festival, Boomtown Fair, Bristfest, One Love Festival and have taken their own brand of Jungle to countries as far and wide as Canada, Croatia, France, Greece, Germany, Italy, Portugal, Sweden, Switzerland, Russia, Spain and the U.S.A. to name but a few.

Currently they manage their own Serial Killaz and Streetlife Recordings labels as have recently signed a plethora of new talent, such as Jam Thieves, Upgrade, Turno, Kitcha, Marcus Visionary, War Machine, Cain 1 and 5 Guns.

With an unprecedented level of talent and skill when they hit the studio, the Serial Killaz have been riding high in the charts for well over ten years earning the respect and support from Drum & Bass and Jungle’s biggest artists. Keep your eyes and ears opens for Serial Killaz releases, coming to the airwaves near you!